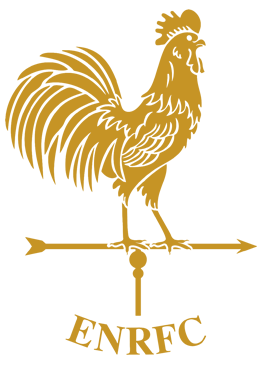 ENRFC was founded in 1920 after a meeting of several hopefuls in the Northern Bar, Howard Place, aiming to develop the game of rugby in the area. The name was either derived geographically or from the location of this meeting. Thomas Henderson believes initial establishing of the club was “undoubtedly partially or entirely the work of the Murdoch brothers, David and John.”

The first home ground was Warriston Park before moving from and between Canal Field, Fettes College, Murrayfield among others, however in 1926 Inverleith Park was settled upon.

In 1953 a post-war delousing facility at the west entrance of Inverleith Park was renovated and rented from council authorities and so a home was found. This has been much upgraded and is still in use today.

ENRFC currently hosts Scotland’s largest annual 7’s competition. The club is based in Inverleith Park, just off East Fettes Avenue and runs a 1st XV, a 2nd XV and The Gents, a veterans’ team for over 35s.

We make no apologies for reprinting (with some editorial changes) the following articles written for our Golden Jubilee, by the late Tom Henderson and long serving member Bernie Lodge, tributes to whom are printed later.

After 50 years it is perhaps understandable that neither personal memory nor written record are at their best. The beginning is hazy but was undoubtedly partially or entirely the work of the Murdoch brothers, David and John. During our first season (1920-21) we played only 5 games and obtained the use of Warriston Park as our home ground. Unfortunately our tenancy was short lived. Pressure from the Education Authority was too great and we gave way to Boroughmuir School.

The first recorded A.G.M. took place at the Y.M.C.A., South St Andrew Street on 4th October 1921. The club officially gave itself a name and a constitution – Northern R.F.C. (the name Edinburgh was not added until several years later). Our title was simply derived geographically.

In the early years we led a nomadic existence, moving from place to place in search of a home. We played at Canal Field, Fettes College, Murrayfield, and several other grounds until we finally settled down at Inverleith Park in 1926. Needless to say, those spartan years recognised no such thing as changing rooms and we were thankful for the trees for both shelter and privacy. Visiting teams from out of town changed at the Y.M.C.A. and travelled to Inverleith Park by tram in rugby gear – and ne’er an eyebrow was raised.

Indeed success was such that by the mid twenties we were forced to restrict admission to the club with a maximum playing membership of 20!!!

The first club photograph was taken in 1926, and by 1928 we had added a second XV and were well on the way to completing our first decade. Recognition gradually dawned with the higher echelons and from time to time our players represented the Edinburgh and District Rugby Union.

At our AGM in March 1939 the club office bearers could not have guessed that the next season they would have a different job to do. War came, club funds were frozen and by and large junior rugby came to a halt.

AFTER THE WAR, a few of the pre 1939 stalwarts, notably Tom Henderson, Freddie Collins and Bob Scott (all of whom are now deceased) resurrected the Club and were ably reinforced in their efforts by several new enthusiasts, among whom were Jack Smith, Neil Mackenzie and Davie Forbes.

For several seasons the club’s existence hung in the balance. There was an acute player shortage and results were poor. In addition our changing facilities were comparatively primitive. We shared the “bird cages” at Inverleith Park and every home game was followed by a walk to Glenogle Baths or, in most cases, rapid dispersal homewards.

In spite of these drawbacks, a tremendous amount of effort was put in by the members and we survived. The club regularly entertained English and Welsh clubs and almost invariably made the long trips south in return. Such adventure was considered quite a thing in these early post war years and often merited local press coverage. These trips, more than anything else, forged a club spirit which was undoubtedly the basis of our future expansion and gave us much badly needed publicity.

There are many more tales about our touring exploits later in this brochure, but I am sure that no member who participated in these early coach trips to Wales will ever forget the pleasures of being snowed in up on Shap Summit, stranded in Shrewsbury or sweltering in St Helens.

It was during the fifties that our fortunes began to change and the club became one of the strongest in the Edinburgh & District Rugby Union. If one player has to be singled out for his influence on the playing standards of the club in the mid-fifties, it must be Jim McLeod – scrum half “par excellence” and captain magnificent. His two seasons of captaincy were followed immediately by two more successful seasons under Marshall Bryce. It is worth noting that these four seasons 1954-58 brought us more honours and more District “caps” than all the remaining seventy-one seasons combined.

In January 1953, we said good-bye to the “bird-cages” and occupied our current premises, at the time a mere concrete shell. Due to the fact that the premises were still being held in reserve for civil defence purposes, we had to erect and dismantle our dressing rooms at the beginning and end of each season. The carpentry had to be seen to be believed!!

In 1955 the Northern “Sevens” tournament was born- just eight teams and one pitch. And the first name to be engraved on the trophy was that of Edinburgh Northern.

The tournament is now one of the most popular on the calendar.

Aside From Its rugby playing abilities Northern has always been known as a sociable club where opponents on the field lay aside their differences of opinion of the laws to agree that the referee was in all probability raised in an orphanage.

The earliest record we have of Northern’s social side is a receipt for £2/1/8d dated 23rd November 1922 and relating to an event put on in the former Y.M.C.A. in South St Andrew Street. Subsequent correspondence reveals a long running argument between club officials and the manager of the Y.M.C.A. when an invoice was tendered not only for the hire of the hall but also 3/6d for the replacement of a roller towel ruined by a club member. Correspondence grew acrimonious and the last record we have is the towel was returned to the club. Things Never Change……

After this the club records are quiet until in January 1953 The “Bowling Green Pavilion” was occupied as our permanent home but it was not until 1964 that the pavilion was reconstructed as a purpose built (or at least semi purpose built) rugby clubhouse. Two years later the bar was officially opened on 24th March 1966 (just in time for the close season!!). Northern was the first Edinburgh junior club to take this step, after Haddington, the second in Scotland to have its own bar. The 5XV’s fielded by the club that season doubtless brought in an income sufficient to gladden the heart of the Club Treasurer.

Whilst all this was happening, however, the club was pursuing other’ moneymaking situations with the social side. In October I959 “Nokiton” described as “The greatest rugby dance of all time” was held as a joint venture with Corstorphine RFC and attracted a crowd of 1,379 to the Palais-du-dance in Fountainbridge where the revellers danced the night away to two bands and enjoyed the refreshments provided by the late bar, 40 feet in length, all for the princely sum of 5/- per person.

By 1968 the new lounge area in the clubhouse was ready and was officially opened by 3 local councillors. The club was now able to hold celebratory evenings such as Tramps Nights where club members and their partners and guests turned up in fancy dress. After a pause for consolidation, 1975 saw the clubhouse extension started and the following year saw the opening of the Tom Henderson Lounge. This increase in space allowed the club to host functions such as Burns Suppers, the first of which took place in 1976.

Just as important, however’, was the establishment of the Ladies Section in recognition of the large part played by the ladies in (almost) all the activities of the club other than actually playing. In the previous year Northern established a mini-rugby section which took place on a Sunday and was coached by both players and parents and supported vociferously by many of the youngsters parents. Some of the products of these Sunday morning sessions still turn out for the club today.

In 1979 Associate Membership of the club was introduced and we gained our first lady member, Mrs Moira Fotheringhame and the following year two members became engaged – to each other. The happy couple were Susan Otter and Steven Burden.

By this time the clubhouse had become the focal point for club activities and was being used for more and more events. Even the volunteer bar crews vied with each other to produce social evenings, – the Top bar crew and the Windmill bar crew being two of the main protagonists. Bad Taste parties (starring the Captain of the Belgrano and the late Grace Kelly) was followed by school days discos and Tarts and Vicars parties.

Since 1979 the Club Dinner has been held annually in the clubhouse and has featured many notable speakers and players. Not many clubs can boast to have entertained the last three British Lions Captains and tickets for the dinner have always been much sought after by non-members.

Rugby has always been a game where the desire to win has not overshadowed the believe that at the end of it all it is still only a game and Northern seem to have found the right balance between the playing side and the social side.